Home » Collaboration the key to our new milestone video

Collaboration the key to our new milestone video 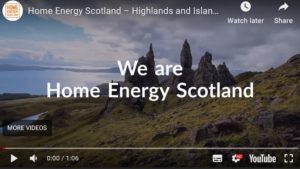 How would you celebrate an important milestone like your tenth anniversary? A weekend away at a cosy retreat, a romantic city break, or maybe a celebration meal in one of your favourite restaurants?

Last summer our Highlands and Islands advice centre approached a different kind of anniversary – ten years of providing impartial energy advice to householders across a huge chunk of Scotland!

So, we made the decision to create a digital legacy to celebrate this significant milestone. Firstly, we asked our team to submit ideas for a video that would unmistakably say: ‘We are Home Energy Scotland in the Highlands and Islands’.

We also identified the following main ingredients for the video:

– Key messages promoting the range of our local advice service

– A storyboard featuring iconic places in the Highlands and Islands

– A soundtrack music that viewers would easily identify as being from the Highlands and Islands.

Finally, with an approved script, storyboard and soundtrack by an up-and-coming Highlands and Islands band in place, our marketing team started work in late 2018 to produce the finished video in time for launch in January.

Watch the final video below or on our YouTube channel, let us know what you think of it and wish us a happy 10th anniversary in the Highlands and Islands!

“Our advice team got right behind this project giving ideas, soundtrack suggestions and feedback at various stages in the production process. It’s been very collaborative, and we are proud of the result.”

“I went to school in Skye with some members of the band Niteworks and being a fan I was keen for colleagues to listen to several tracks on their current album. I was really pleased that we unanimously chose the title track Air Fàir an Là’, meaning ‘At the dawn of day’. It’s a traditional piece of music fused with an amazing electronic beat.”

The video is now being used on our social media channels, in outreach staff presentations and emails to customers.

BACK TO ALL NEWS
X