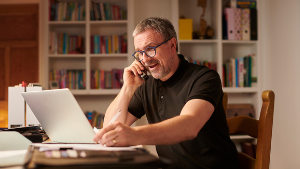 John and his family live in a bungalow in Orkney. They used to have electric storage heaters and were on a meter arrangement and tariff called Total Heat with Total Control (THTC). They had two separate meters – one that recorded the electricity used around their home, including lights and sockets, and another meter on a separate circuit that recorded their heating and hot water.

In 2016 the family replaced their storage heaters with an air-to-air heat pump, also known as a warm air system. Without storage heating, it was expensive to stay on THTC because the warm air system used electricity from the same circuit as their lights and sockets. This meant that their heating system was using the tariff’s more expensive rate. This meter arrangement also restricted John and his family to a single electricity supplier, meaning they couldn’t shop around for a better deal.

John spoke to a local energy advisor and decided he could save money on his energy bills by switching to a single rate supply and moving to a new supplier. He contacted his energy supplier and arranged for his meter to be changed.

The meter engineer didn’t show up, so John had to rearrange and got £30 compensation from his supplier. The second appointment was successful – the engineer moved the wiring from both of the old meters to a single, new meter.

Before he could switch supplier, John had to get a new MPAN from his existing supplier. The MPAN is a 21-digit number unique to every electricity supply point. Households with restricted meters have two MPANs, which might limit the range of electricity suppliers and tariffs available. After four months of John chasing his supplier, they removed the old MPANs from his account and he got a new MPAN.

John got poor service from his supplier – the Electricity Supply Standards Licence Conditions require suppliers to complete customer transfers within 21 days. John’s supplier failed to do this and offered him compensation, but he decided to put in a claim to the Ombudsman.

John had kept good records of all his communications with the supplier, which helped with his claim. The Ombudsman awarded John significantly more compensation for goodwill, and a penalty payment from the supplier for their slow service.

This was a frustrating process for John, but now he and his family can benefit from lower priced electricity and have the freedom to switch supplier and get a better deal.

If you’ve got electric heating, we can explain how your heating system and tariff works, and give you advice on getting the most out of your heating while saving money on your bills. Call 0808 808 2282 for free, impartial advice or leave your details using our contact form and we’ll be in touch.